FORTH at the service of the Local Authorities. The valuable contribution of Geoinformatics in the prevention and treatment of landslides | News 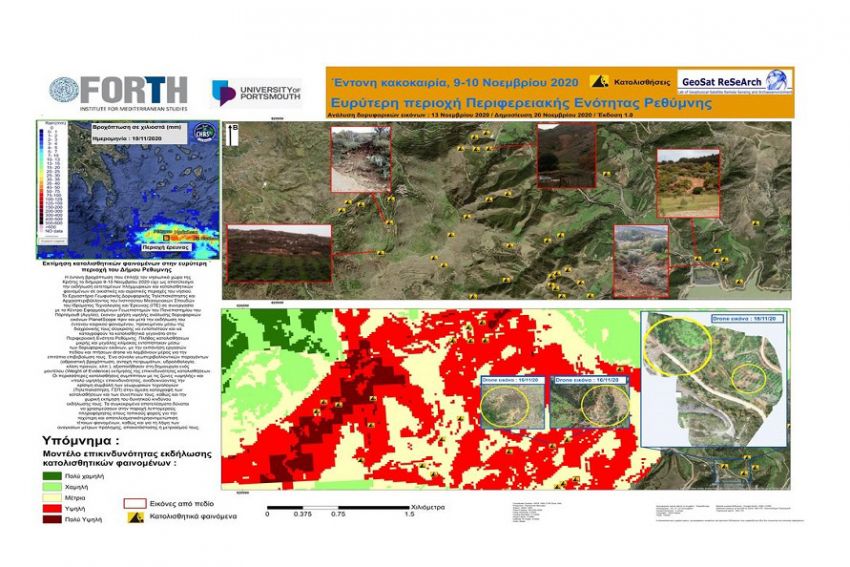 FORTH at the service of the Local Authorities. The valuable contribution of Geoinformatics in the prevention and treatment of landslides

The unprecedented rainfall of high amount and intensity that hit the island of Crete during the 9-10th of November, 2020 had as a result the occurrence of extensive floods and landslides in residential and rural areas of the island. Among the severely affected areas was the Regional Unit of Rethymno, with the effects of severe weather on both infrastructures (damages to constructions and road network) and in its primary sector (destruction of crops) being characterized as incalculable.

The Laboratory of Geophysical Satellite Remote Sensing and Archaeoenvironment of the Institute of Mediterranean Studies of the Institute of Technology and Research (FORTH) in collaboration with the Center for Applied Geosciences of the University of Portsmouth (UK) used high-resolution PlanetScope satellite images pre- and post- the disastrous event, in order, through their temporal comparison, to detect and record the landslide events occurred in several parts of the metropolitan municipality of Rethymno, and nearby neighboring municipalities. A number of small and large-scale landslides were detected through remote sensing, close to the settlements of Myrthios (municipality of Rethymno) and the "Dam of Rivers" (municipality of Amari). The implementation of field surveys and drone flights took place for the in-situ confirmation of the detected landslides using remote sensing. The landslide-triggered damages on the road network nearby the " Dam of Rivers" and the destruction of adjacent olive trees are indicative of the extent of the disaster. 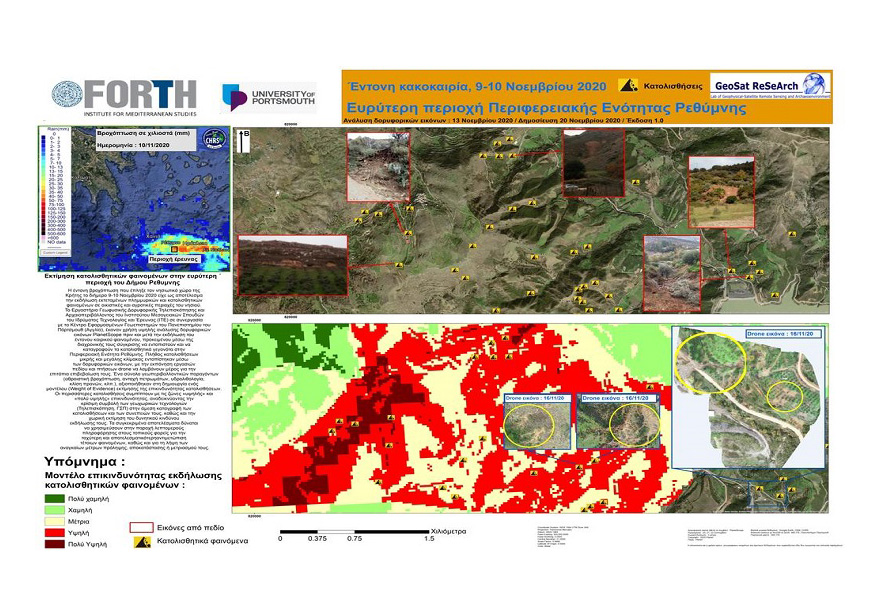 The use of Geographic Information System (GIS) and remote sensing for the detection of the landslides occurrence during a previous intense heavy rainfall «Οkeanis», over the municipality of Rethymno, on the 24-26th of February 2019, and a set of geoenvironmental factors (cumulative rainfall, rock strength, hydrolithology, slope angle, etc.), were used for the development of a landslide hazard assessment model (Weight of Evidence). The specific model produced a thematic map which highlights the landslide hazard assessment for the municipality of Rethymno in case of similar extreme weather conditions taking place in the future. The overlay of the detected landslides occurrence, due to the heavy rainfall during 9-10 of November 2020, over the model of landslide hazard assessment revealed a more than 80% matching of landslides over zones of "high" and "very high" hazard, highlighting the prediction capability of the applied model.

The final results, as shown in the relative figure, highlight the critical contribution of geospatial technologies (Remote Sensing, GIS) in the direct recording of landslides and their consequences, as well as the spatial assessment of their potential hazard of occurrence. The specific results can be used to provide detailed information to local agencies for faster and more effective response to similar phenomenon, as well as to take the necessary measures to prevent, recover or mitigate it.

The Laboratory of Geophysical - Satellite Remote Sensing and Archaeoenvironment (GeoSat ReSeArch Lab) has been active for the past 25 years in the field of Geoinformatics covering a wide range of geophysical surveys, Geographic Information Systems (GIS), Remote Sensing, aerial-photography and photogrammetry, 3D landscape modeling, giving emphasis to the natural and cultural environment.