The Institute of Astrophysics-FORTH joins Europe’s largest astronomy network
Until now, Europe has had two major collaborative networks for ground-based astronomy, one in the optical domain (OPTICON) and the other in the radio-wave domain (RadioNet). These two networks, having successfully served their respective communities over the past twenty years, now come together to form Europe’s largest ground-based astronomy collaborative network. In Greece the network includes the Institute of Astrophysics FORTH and the National Observatory of Athens. During the ORP kick-off meeting on Tuesday 23 March 2021, the Director of the Institute of Astrophysics, Prof. Vassilis Charmandaris, was unanimously elected as Vice Chair of the Board of Directors of the network, having served as Chair of the Board of Directors of the OPTICON network for the past 2 years. The project is coordinated by CNRS (France), together with the University of Cambridge (UK) and the Max-Planck Institute for Radio Astronomy (MPIfR) (Germany) and it involves astronomers from 15 European countries, Australia and South Africa, amounting to 37 institutions.
Read more

An evolutionary rare strategy for circumventing pesticide resistance in the major bee parasite
Honey bees pollinate the majority of crops, but their survival is under threat and the parasitic mite Varroa destructor may be a major cause of honey bee decline. Beekeepers use selective chemical acaricides with low bee toxicity to control Varroa infestation, a powerful “pro-drug” approach relying on species-specific bioactivation, to attain this selective toxicity and protect bees.
Read more
More Research Highlights 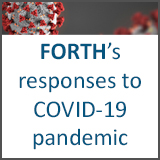