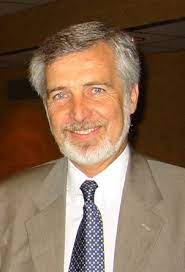 Stelios Orphanoudakis was a visionary pioneer in the field of Information Society Technologies. He made fundamental academic and scientific contributions at an international level in research areas such as computational and knowledge-based vision, robotics, medical informatics, medical and diagnostic imaging, and intelligent image processing. He was instrumental in enhancing the role of FORTH on the international scientific scene, promoting and supporting scientific research in Greece and in Europe.

He returned to Greece, in the mid - 1980's, where he was appointed Professor of the newly founded Department of Computer Science of the University of Crete, while at the same time, he was one of the first and most influential researchers at the Institute of Computer Science (ICS) of FORTH. His research work is reported in an impressive number of international scientific publications.

In 1985 Stelios Orphanoudakis also established the Laboratory of Computational Vision and Robotics of FORTH-ICS. The laboratory's long-term objective is to create computer-based systems capable of understanding the surrounding environment and exhibiting intelligent behaviour through the analysis of perception data. A variety of highly innovative robotic systems have been developed under his supervision.

From 1994 to 2004, Stelios Orphanoudakis was the Director of FORTH-ICS, which he guided to research excellence at an international level and to a pioneering role in promoting Information Society Technologies worldwide. He founded in 1995 FORTHnet S.A., a spin-off company of FORTH-ICS. Today, FORTHnet is one of the most dynamically developing companies in the Internet and Telecommunications sector in Greece.

Stelios Orphanoudakis was a fervent advocate of multidisciplinary research approaches and of international research cooperation. He initiated the FORTH-ICS Research Programme on Biomedical Informatics in collaboration with the Institute of Molecular Biology and Biotechnology of FORTH. He also promoted the active participation of FORTH in a wide variety of European and international initiatives, including the European Research Consortium for Informatics and Mathematics (ERCIM) - of which he was President in 2004 - and the World Wide Web Consortium (W3C). He participated in many initiatives and activities targeted to promote research and technological development at a national and international level. He had been an active member of high-level committees, amongst others, the National Telecommunications and Post Commission of Greece, the National Advisory Research Council of Greece, and the Hellenic Foundation for Culture.

In January 2004, he was elected Director of FORTH and Chairman of the Board of Directors in recognition of his international scientific prominence, his administrative abilities and experience, and his twenty year long dedication to FORTH. The entire community of FORTH deeply esteemed his personality and his work.

Stelios Orphanoudakis was an extraordinarily warm, charismatic, and deeply human personality that was respected and loved by all his collaborators. With his vision in research and innovation, enthusiasm and exceptional communicative ability, he inspired, encouraged and supported new generations of young scientists, while attracting researchers from all over the world to work at FORTH.

The premature loss of Stelios Orphanoudakis has deprived FORTH of one of the most influential actors of its history. Greece is bereft of one of the most active advocates of research and technological development. The continuation of his work and the commitment to further pursue his vision constitute a formidable heritage, a moral duty and a long-term challenge for FORTH.