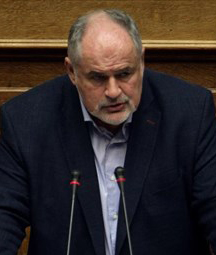 Costas Fotakis was President of FORTH from 2011 to 2015. He is currently Distinguished Member of FORTH and Emeritus Professor of Physics at the University of Crete. From January 2015 till July 2019, he served as Alternate Minister for Research and Innovation. During this time, he designed and implemented Research and Innovation policies in Greece and participated in the EU Research Ministers Council.

He joined the Physics Department of the University of Crete as an Associate Professor and was promoted to Professor in 1989. He also served as Director of the Institute of Electronic Structure and Laser (IESL) at FORTH (1997-2013). He was founder of the Laser and Applications Division of FORTH, and since 1990 has been leading the European “Ultraviolet Laser Facility” at IESL, which is currently part of the “LASERLAB-Europe” consortium, linking 35 major European laser infrastructures. During 1994-1997 he served as Chairman of the Scientific Board of the NCSR “Demokritos” and during 2012-2013 he chaired the Association of the Presidents of the Research Centers in Greece.

His research interests are in the fields of laser spectroscopy and photonics; in particular, his research is focused on the study of laser interactions with materials and biomaterials and related biomedical diagnostic and processing applications. He has over 330 publications in refereed scientific journals, more than 11000 citations and an h-index higher than 55 (ISI Web of Knowledge). He has been plenary, key note or invited speaker in numerous international scientific conferences and events and has also served on the editorial boards of several international scientific journals. Finally, he has been Chairman or Member of the Scientific Committees of major international Conferences.

Distinctions awarded to him include the 2004 ‘Leadership Award’ of the Optical Society of America (OSA) “..for decade-long leadership of, and personal research contribution to, the field of laser applications to art conservation and leadership in establishing and guiding the scientific excellence of laser science programs in IESL-FORTH..”. He has been Springer Professor at the University of California, Berkeley for 2005-6. He has been elected as a Life Member and Fellow of the OSA and has been a Member of the Fellows Committee of the European Optical Society (EOS). He has also served as a member on the Board of Stakeholders of the European Technology Platform “Photonics 21”. In 2010 he was awarded an Honorary Doctorate by the Mediterranean University of Marseille. In 2019 he was offered the “Dionyz Ilkovic” medal for lifetime achievements in science by the Slovak Academy of Sciences.