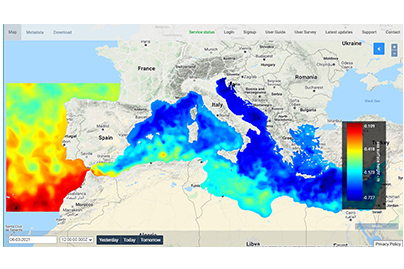 A recent tide observed at the beaches of Crete has reasonably aroused public interest or concern, for upcoming consequences. But was it just a local phenomenon? Which areas were most affected? How does it evolve over time?

The opportunity to monitor the evolution of this phenomenon was provided by the MARINOMICA platform (http://odysseaplatform.eu/) developed in the framework of the European project H2020 ODYSSEA, in which the Coastal and Marine Research Laboratory of FORTH has participated for the last 4 years. The MARINOMICA oceanographic observation and forecasting platform hosts an expanded oceanographic database of observations and forecasts, compatible with other major European databases such as the Copernicus user-friendly maritime services (https://www.copernicus.eu/el). It is also connected to 8 observatories around the coast, in the north from the port of Valencia to Kavala, and in the south from Morocco to Egypt, which collect real-time oceanographic measurements on the spot. The ODYSSEA project is coordinated by the Department of Environmental Engineering of the Democritus University of Thrace.

MARINOMICA provides forecasts for the evolution of the tide, as well as visual material from the Mediterranean region such as the image below taken on 06/03. The intensity of the colors of the bar from top to bottom shows the intensity of the low tide in the area. The tide gauge in the Thracian Sea indicated about 45 cm drop, and generally about 40 cm in the north and about 20-25 on the southern shores of the Mediterranean.