On Tuesday, December 2 at 7pm at the residence of the Spanish ambassador to Greece, Mr. Miguel de Fuertes and his spouse's, Ms. Aurora de Fuertes, the latter a professor at the University of Oviedo, Mr. Nikos Hadjinicolaou was awarded the Cross of the Order of Isabella the Catholic, a Spanish civil order granted in recognition of services that benefit the country. Mr. Hadjinicolaou received this honor for his extensive service to the study and promotion of the works of Dominikos Theotokopoulos as well as of modern spanish art. Mr. Hadjinicolaou holds the positions of Professor Emeritus at the University of Crete and Honorary Researcher at the Institute for Mediterranean Studies of the Foundation for Research and Technology - Hellas (FORTH) and he is also a Honorary Consul of Spain to Crete.

The ceremony was attended by the Secretary General to the Ministry of Foreign Affairs, Mr. Aristeides Agathoklis, the Mayor of Rethymno Mr. G. Marinakis and his spouse, the Consul General of Spain Mr. Juan Lugo and his spouse, the Spanish attaches of trade and military, Joaquin Yanez and Jaime Gonzalez - Torres respectively, the Honorary Consuls of Spain in Piraeus and Patras, Mr. Giorgos Potamianos and Phoibos Gatopoulos respectively, the Ambassador Mr. A. Exarhos, the Chairman of the Board of Directors of the Foundation for Research and Technology - Hellas (FORTH), Professor Alkiviades C. Payatakes, the former Provost of the University of Crete, Mr. G. Grammatikakis, the Director of Institute Cervantes Mr. Eusebi Ayensa, the Director of the Institute for Neohellenic Research of the National Hellenic Research Foundation, Professor Paschalis Kitromilidis, the National School of Fine Arts History of Art Department Head Ms. Efi Avdela, the film director and actor Mr. Lefteris Voyatzis, the Spanish hellenist Mr. Pedro Olaya, university faculty and modern art historians, museum curators and Greek University faculty.

See the speech delivered by Mr. Hadjinikolaou at the ceremony here 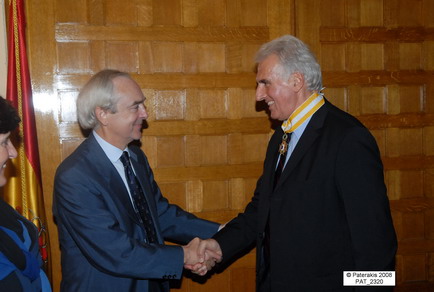 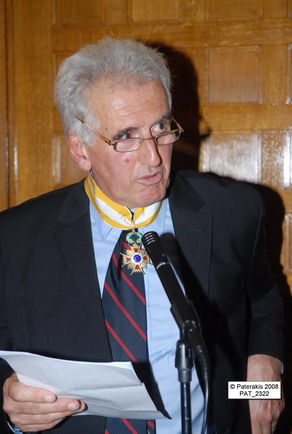 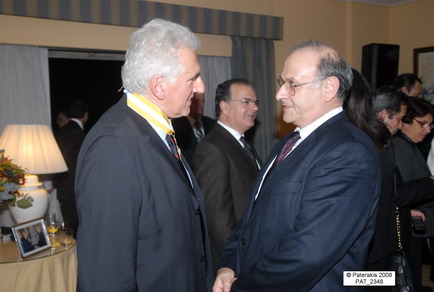