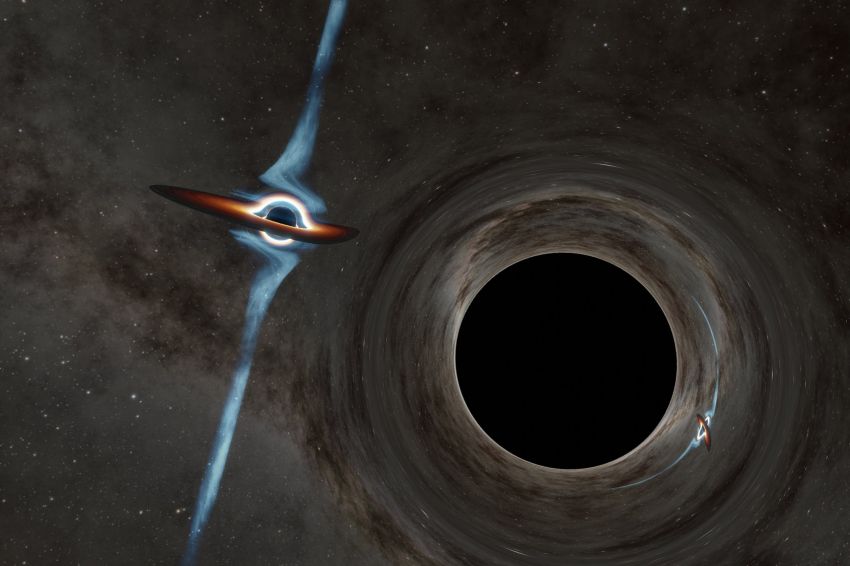 Colossal Black Holes Locked in Dance at Heart of Galaxy

Locked in an epic cosmic waltz 9 billion light-years away, two supermassive black holes appear to be orbiting around each other every two years. The two massive bodies are each hundreds of millions of times the mass of our sun and separated by a distance of roughly fifty times that between our sun and Pluto. When the pair merge in roughly 10,000 years, the titanic collision is expected to shake space and time itself, sending gravitational waves across the universe.

A team of astronomers coordinated by Tony Readhead, Caltech Professor Emeritus and Honorary Fellow at the Institute of Astrophysics of FORTH (FORTH-IA), has discovered evidence for this scenario taking place within a fiercely energetic object known as a quasar. Quasars are active cores of galaxies in which a supermassive black hole is siphoning material from a disk encircling it. In some quasars, the supermassive black hole creates a jet that shoots out at near the speed of light. The quasar observed in the new study, PKS 2131-021, belongs to a subclass of quasars called blazars in which the jet is pointing towards the Earth. Astronomers already knew that quasars could possess two orbiting supermassive black holes, but finding direct evidence for this has proved difficult.

Artist’s impression of black holes and the jet producing the observed radio waves. The brightness of the jet is seen to fluctuate as the second black hole moves around the first one. Animation credit: Caltech/R. Hurt (IPAC)

The tell-tale evidence came from radio observations of PKS 2131-021 that span 45 years. According to the study, a powerful jet emanating from one of the two black holes within PKS 2131-021 is shifting back and forth due to the pair's orbital motion. This causes periodic changes in the quasar's radio-light brightness. Five different observatories registered these oscillations, including Caltech's Owens Valley Radio Observatory (OVRO), the University of Michigan Radio Astronomy Observatory (UMRAO), MIT's Haystack Observatory, the National Radio Astronomy Observatory (NRAO), Metsähovi Radio Observatory in Finland, and NASA's Wide-field Infrared Survey Explorer (WISE). The combination of the radio data yields a nearly perfect sinusoidal light curve unlike anything observed from quasars before.

“Nature has a habit of tricking us. That is why many people with different methods looked at the data. Once we all came back with the same answer we knew what we are looking at is a real signal” says co-author Ioannis Liodakis, a postdoctoral researcher at the Finnish Center for Astronomy with ESO who obtained his PhD in 2017 from the University of Crete.

Ripples in Space and Time

Most, if not all, galaxies possess monstrous black holes at their cores, including our own Milky Way galaxy. When galaxies merge, their black holes "sink" to the middle of the newly formed galaxy and eventually join together to form an even more massive black hole. As the black holes spiral toward each other, they increasingly disturb the fabric of space and time, sending out gravitational waves, which were first predicted by Albert Einstein more than 100 years ago. Although until now gravitational waves from binary black holes of such colossal masses have not been detected, PKS 2131-021 provides the most promising target yet.

The discovery would not have been possible without the high-quality data from a massive program on the study of emission from black holes in radio waves, which has been operating since 2008. Using the 40-m radio telescope at California’s Owens Valley to study how black holes convert material they "feed" on into relativistic jets, the program constitutes one of the main axes of the close collaboration between Caltech and the Crete Astrophysics research group, including, in addition to Readhead, and Liodakis, FORTH-IA postdoctoral researcher Sebastian Kiehlmann, and University of Crete Professor and FORTH-IA researcher Vasiliki Pavlidou.

"PKS 2131-021 was varying not just periodically, but sinusoidally," says Readhead. "That means that there is a pattern we can trace continuously over time." The question, he says, then became “how long has this sine wave pattern been going on?”

The research team then went through archival radio data to look for past peaks in the light curves that matched predictions based on the more recent OVRO observations, and found data going back to 1976.

"This work shows the value of doing accurate monitoring of these sources over many years for performing discovery science," says co-author Roger Blandford, professor at Stanford University and a member of FORTH-IA’s advisory committee.

Lightcurve of PKS2131-02, in which the sinusoidal behavior can be clearly seen (image credit: Tony Readhead/Caltech)

Readhead compares the system of the jet moving back and forth to a ticking clock, where each cycle, or period, of the sine wave corresponds to the two-year orbit of the black holes (the observed cycle is actually five years due to light being stretched by the expansion of the universe). This ticking was seen in 1976 and then went on for eight years before disappearing for 20 years, likely due to changes in the fueling of the black hole. The ticking has now been back for the last 17 years.

“The 22-year gap was puzzling at first, but when we saw the periods of the binary orbit estimated independently before and after the gap are almost identical, like a ticking clock, we were convinced we are looking at something new and very interesting”, Liodakis says.

"Being able not only to discover such an unusual source but also understand what makes it tick – this has been one of the most exciting results to come out of this program” says Pavlidou.

"Our study provides a blue print for how to search for such blazar binaries in the future," says Kiehlmann.

The Astrophysical Journal Letters study titled "The Unanticipated Phenomenology of the Blazar PKS 2131-021: A Unique Super-Massive Black hole Binary Candidate" was funded by Caltech, the Max Planck Institute for Radio Astronomy, NASA, National Science Foundation (NSF), the Academy of Finland, the European Research Council, ANID-FONDECYT (Agencia Nacional de Investigación y Desarrollo-Nacional de Desarrollo Científico y Tecnológico in Chile), the Natural Science and Engineering Council of Canada, the Foundation for Research and Technology – Hellas in Greece, the Hellenic Foundation for Research and Innovation in Greece, and the University of Michigan.