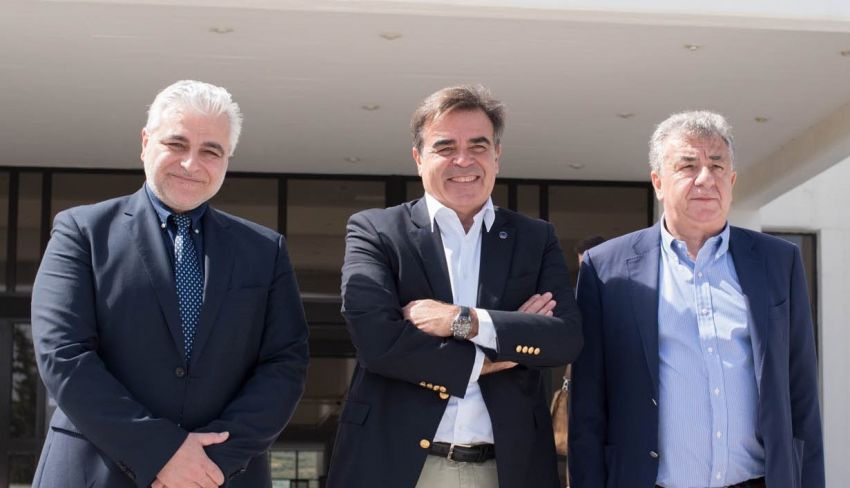 The Vice President of the European Commission, Mr. Margaritis Schinas, visited FORTH on Friday, September 30, 2022. He was informed by the President of FORTH, Prof. Nektarios Tavernarakis, about the activities, achievements and development planning of the Foundation. The Regional Governor of Crete, Mr. Stavros Arnaoutakis, and the Mayor of Heraklion, Mr. Vassilis Lambrinos were also present.

The Vice President was also informed about the activities of the Science & Technology Park of Crete (STEP-C). Afterwards, he visited the biotechnology company Enzyquest, a startup of FORTH’s Institute of Molecular Biology & Biotechnology, and the nanotechnology company Biomimetic, a spin-off of the Institute of Electronic Structure and Laser, which have both been installed within the incubator of STEP-C. He showed particular enthusiasm and interest during his tour of the laboratories and was informed of their progress, starting from the research stage, the source of inspiration of the innovative idea, the European funding process, the appeal to investors, up to the establishment of the companies and the connection with the markets within and beyond Greece. The Vice President congratulated the executives of the companies for their successful course to date.

Mr. Schinas was then given a tour of the premises of the Institute of Computer Science’s Ambient Intelligence Programme. It was followed by a visit to the simulation spaces of the Intelligent Classroom, the Intelligent Home and the Intelligent Greenhouse, where they had the chance to experience a variety of interactive systems and intelligent environments, as well as, to participate in an augmented Mixed Reality game. They also visited the infrastructure in which studies are conducted to evaluate the usability and online accessibility of various applications and services, based on the principles of a human-centric design and universal access. Finally, they had the opportunity to learn about technologies that are developed by the Laboratory in the context of projects financed by the European Commission. More specifically, AmI members presented the DARLENE project, in which a portable system is currently being developed that integrates Artificial Intelligence and Augmented Reality technologies that can help the Police of European countries in their fight against crime and terrorism.